The Technics ST-G30 Hi-Fi music server is engineered to deliver high-quality sound and a premium user experience for network audio. 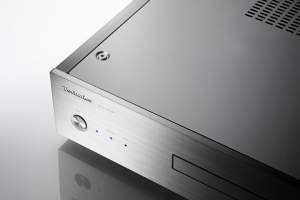 During CD ripping, if there are uncorrectable errors due to marks or scratches on the CD, ST-G30 determines the size of the error, performs a read retry in an attempt to read the correct data. If the retry still results in an error, the ST-G30 notifies the listener with an alert.

In the case of music data streamed over a network, the decoding process performed by the player and the fluctuation of voltage caused by the packet processing load, etc., can cause jitter. The ST-G30 can connect to a USB-DAC device via the USB output and perform the decoding process, thus reducing the processing load in the player and achieving data transmission with minimal jitter.

The power supply output is divided into three feeds, one each for the SSD drive data block, USB-Audio output block, and control and display block, to lower the mutual noise effect among blocks. A large capacitor array is used for the SSD drive block, which requires a power supply capability with high tracking performance for peak current. The USB-Audio output block, which demands a clean power supply, is equipped with a stabilised circuit and large-capacity electrolytic capacitors.

Each digital interface line is isolated. In addition to separating the power supply for the import/backup USB, LAN, and SSD, a power conditioner is provided for each. This reduces the effect of noise generated mutually from the other blocks. A common mode filter and large-capacity pulse transformer are also used for the LAN, to decrease the effect of external noise.

Networks, USB devices and drives can be sources of noise and degrade sound quality during playback. The ST-G30 controls the SoC operation according to the mode and reduces the CPU load to minimise noise generated inside the device during playback to enhance the sound purity.

The optical drive, which generates rather large rotational vibration during operation, is enclosed in a silent drive shelter to achieve quiet operation, and its drive base is rigidly mounted at the centre of the casing to suppress vibration and noise.

The High-Rigidity Metal Double Chassis features a steel-plate inner chassis and a steel-plate outer chassis to reduce vibration and noise that degrade the purity of the sound. To support heavy parts and components and lower the centre of gravity for improved stability, the inner chassis is made of a 1.2-mm-thick plate. The bottom surface of the cabinet is a 2-mm-thick steel plate. This improves the vibration damping performance and achieves a low centre of gravity. The front panel is made of a 7-mm-thick aluminium plate, while the side panels are 2-mm-thick aluminium plates to resist the effects of electromagnetic noise.
This not only achieves an elegant appearance, but also enhances the cabinet vibration damping effect and ensures firm support of the chassis for increased rigidity.

The insulator is made of cast iron with high rigidity and an excellent damping property. It significantly reduces extraneous vibrations and external transmission of vibrations. 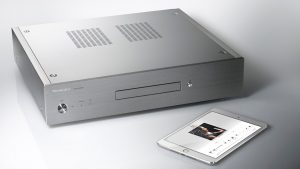 Easy Management of Your Digital Music Library Without Having to Use a PC. Stress-free Musical Enjoyment.

Using the Technics Music App for tablet devices and smartphones allows easy operation of tasks such as CD ripping, tag editing,* import/backup, USB-Audio playback, and various settings. Music information can be sourced from the Internet and added with Gracenote® for data that has been ripped from a CD. There’s no need for PC tasks that distract you from listening to your music, so you enjoy easy, comfortable operation.

DiXiM Media Server software has a long history in providing media server software. It has been customised for audio use. In addition to being able to search by artist and album you can quickly and easily go to the track you want. The software features a wide range of navigation features, such as codecs, recently added tracks, recently played tracks, and most-played tracks. It also displays album art on the app without any restrictions on resolution.

Choose the Ripping Format and Level That You Like

In addition to high-res formats like WAV, AIFF, FLAC, and ALAC, DSD distribution is supported. For USB-Audio output, formats go up to 384-kHz/32-bit PCM and 11.2-MHz DSD.

In response to the future storage requirements, the internal SSD drive can be changed for one with a larger capacity.

*Recommended SSD: Intel(R) SSD DC S3510 Series
*Intel is a trademark of Intel Corporation in the U.S. and/or other countries

This function links up with Technics TRACKS to automatically download high-res music that you’ve purchased on your smartphone or other source to the integrated SSD. This adds to your musical enjoyment without having to use a PC.

*Technics TRACKS can be used in the UK, Germany, and Canada. (as of January 2016)