After having pushed back the limits in electromagnetic technology with the Grande Utopia EM and the Stella Utopia EM, Focal engineers discovered that the magnetic field varies regardless of its intensity. Indeed, it is not stable because it is modulated by three factors: movement of the voice coil, Foucault current passing through it and the frequency. Consequently, the voice coil is in the magnetic field which becomes too variable, and this leads to loss of precision.

The NIC technology lies in a Faraday ring whose dimensions, materials and positioning we were able to optimise to make the magnetic field be no longer affected by the position of the voice coil, by the amperage or the frequency of the current passing through it. This solution permits to control the magnetic field to decrease the effects of distortion and give the sound a very high-definition and an unprecedented dynamic.

The midrange register is no doubt the most complicated to control in a sound system. Thanks to the power of finite element analysis, our teams have revealed resonances which alter definition in the suspension which connects the cone to the basket

The solutions already known for increasing the damping properties of the suspension all result in an increase of the mass which consequently alters definition. The answer came from a technology used in earthquake-resistant skyscrapers and which is also used for the suspension on racing cars. This technology is called a “Tuned Mass Damper”: an additional mass oscillates in opposition to the resonance frequency to control it.

Their patented Tuned Mass Damper consists in simply two tubular rings on the suspension to avoid deformation of the cone without afflicting the dynamics. It reduces drastically the distortion and increase the definition.

Our Beryllium tweeter features an incredibly light and extremely rigid dome, that deliver a transparent and dynamic sound. Its main limitation comes from the compression of air in the cavity behind it that creates interference with the incredible definition. To overcome this, the ideal would be to have a nearly infinite volume. But the requirement for Sopra to be compact meant that as much of the cabinet as possible had to be used for the bass. We had to explore other options for loading the tweeter, which led us to come up with the IHL system.

The rear of the Beryllium tweeter is loaded via a small cavity which is connected to the exterior of the enclosure by a horn. Sound waves from the rear of the tweeter are delicately and gradually absorbed. Its acoustic impedance approaches zero so that no resistance alters the movement of the dome. This reduces distortion by 30% and pushes definition to its maximum.

Beyond Aesthetics and Shape 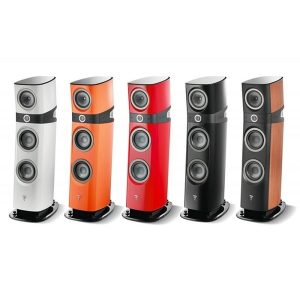 The Sopra line is destined for the most passionate sound enthusiasts. Its design favours performance, whilst bringing together the qualities expected of an object which will be integrated into very elegant interiors and décors. Lacquered or bloodwood finishes are associated to noble materials to create an elegant line. Substantial efforts were made to give the front a tidy appearance, particularly around the speaker drivers, to iron out any aspects which could afflict the acoustics or the appearance.

Sopra’s very structure is articulated around the intermediate section. This injected polyurethane component allows for the upper and lower cabinets to be inclined for the “Focus Time” (acoustic convergence of the channels). It also provides the freedom to achieve the desired enhancements for the treble (decompression, isolation of the tweeter section…). It contributes to the very high rigidity of the structure as a whole and its compactness optimises the use of space for the midrange.

The two 8” (21cm) woofers for the bass register equipped with natural inductance magnetic circuits benefit from a substantial volume thanks to the tweeter’s IHL, allowing us to take full advantage of the cabinet’s capacity. Indeed, unlike Utopia, which is extravagant by essence and where size is by no means a constraint, Sopra aims for maximal compactness to ensure easy integration into reasonably sized rooms.

What’s more, the cabinet’s Gamma Structure with a 69mm front panel provides remarkable inertia considering such a size. Weighing 120 lbs (70kg), Sopra n°3 is by no means envious of its larger competitors… Thus weight and compactness are well balanced to provide impressive density and articulation. This remarkable control of the bass makes Sopra n°3 even easier to integrate. It is perfectly at ease in rooms measuring up to 320ft2 (30m2), and is even ideal for larger rooms measuring up to 750ft2 (70m2).

Sopra’s cabinets are designed in our cabinet-making facility in Bourbon-Lancy using the same manufacturing process as for Utopia. All Sopra’s speaker drivers are manufactured in France for an optimal products control and the guarantee of a unique sound quality. The final assembly of all our hi-fi loudspeakers is done at Focal to ensure a better quality control.